Indian City in Uproar over Death of Nine-Year-Old Girl

DELHI, January 22 (Compass) - - Citizens of Jhabua in Madhya Pradesh are still enraged over the murder of a nine-year-old girl whose body was discovered in a mission school compound on January 13. Local government minister Kailash Vijayvargiya believes the violent clashes in Jhabua are the result of a "well-planned" conspiracy.

Hindu protesters allege that Sujata, the daughter of a fruit-seller, was selling fruit outside the Catholic mission school when a young man beckoned her into the school. When she did not return, her brother went to search for her and eventually found Sujata's body on the school grounds.

The following day, a crowd of over 500 people gathered outside the school in Jhabua. The crowd forced their way onto the mission premises, chanting anti-Christian slogans, and pelting stones at staff and vehicles in the compound.

Police initially dispersed the crowd at around 4 p.m. on January 14, but a mob re-assembled on the school grounds at 7 p.m. This time the police used batons to break up the crowd.

Later, police arrested seven staff members, including Father John Sunni, in charge of the mission school, and the school principal.

Observers said the arrests were made to appease the crowd, whose anger had been fueled by militant Hindu groups such as the Hindu Jagran Manch (HJM) and the Vishwa Hindu Parishad (VHP). VHP leader Khumsing Maharaj led a crowd of hundreds to the school premises and demanded the arrest of school staff.

A few days after the murder, police arrested Manoj Jadhav, an employee of an insurance company, who reportedly confessed to the crime of raping and killing Sujata, before throwing her body into the mission compound.

However, Maharaj claimed that Jadhav was mentally retarded and could not be responsible for the crime. He further threatened to take drastic steps if the “real culprits” were not caught.

The Hindustan Times on January 17 quoted a spokesman for the Catholic diocese, who said the Bajrang Dal, HJM, VHP and other Hindu organizations were leading mass protests and spreading misinformation about the incident. The spokesman also said people were being brought in from Gujarat to "aggravate the already tense atmosphere."

Krishna Ben, a Gujarati disciple of a famous Hindu guru, led a mob to nearby Amkhut village soon after the murder and made provocative speeches against the Christian community. The mob later descended on the local Church of North India premises where they ransacked buildings and other church property.

Retaliation soon followed from the local community, which is composed mostly of second generation Christians from tribal backgrounds. The Hindu mob was dispersed, only to return armed and in greater numbers with VHP and Bajrang Dal activists. Several houses owned by Christians were burned to the ground while police failed to intervene.

Arjun Pal, a member of the Hindu organization Seva Bharati, was killed in the clashes that day. Chief Minister Uma Bharati, a Hindutva (Hindu nationalist) hardliner, later paid tribute to Arjun Pal and said the sum of 100,000 rupees ($2,200) had been paid to his family as compensation.

Ms. Bharati, speaking to a gathering of Hindu protestors, said she "strongly disapproved of their negative slogans." However, she was quick to add that the provision of medical and educational services by Christian missionaries in Jhabua should not be used as a cover for religious conversions, reiterating that conversion by means of "enticement" is against the law.

On January 21, the situation remained tense. Anti-Christian pamphlets were distributed openly in bus terminals, at marketplaces and at the funeral of Arjun Pal, now described as a martyr for the Hindu cause.

The pamphlets warned against conversion drives sponsored by "anti-nationalist forces and missionaries," urging Hindus to band together and defend India as a Hindu nation. VHP leaders also alleged that a conspiracy to create another "Nagaland" in Jhabua was underway. The population of Nagaland, a state in northeast India, is at least 50 percent Christian.

Throughout Jhabua, banners and pamphlets continue to accuse Christians of the murder. Many still believe the accusations, even though an investigative team led by minister of state Kailash Vijayvargiya returned from Jhabua convinced that school personnel are innocent. 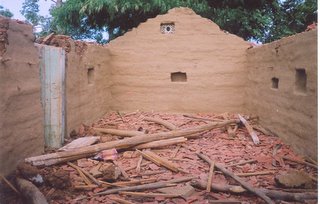 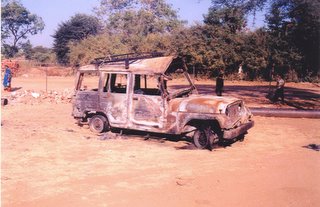 Panaji, January 4: A BLOCK of carved stone, which was found in the compound of the Bishop's Palace in Panaji, has become the centre of a controversy.

Church authorities say the stone was found in the palace premises after part of a wall was broken during renovation. But as rumours spread that the stone was found while the ground was dug up, RSS and allied organisations began to lay claim to it earlier this week.

According to Raju Velingkar, in-charge of the RSS Vishwa Samvaad Kendra, the stone was part of a "Shiva Lingam" destroyed by the Portuguese and will have to be "located" where it was found. Sources said a group led by BJP councillors Pritam Rane and Deepak Mapusekar and RSS leader Raju Sukerkar had attempted to gatecrash the Bishop's Palace and make away with the stone on Monday.

But officials at the Bishop's Palace, located just 50 metres from CM Manohar Parrikar's official residence, prevented them from doing so and insisted that the object would be handed over only to the government. Father Olavo Velho Pereira, director of the Diocesan Centre for Social Commu-nicatioas Media, said a process was underway to establish the stone's authenticity. Department of Archaeology and Archives director M.L. Dicholkar said the object would be shifted to the Goa State Musuem and has written to church authorities in this regard.