15th July 2004 : Shaler Village, Satana, Taluk, Nashik District, Maharashtra: Motiram Borde, a Christian villager and his teenage son, Bhagwan, were forcibly locked up in the police station. They were arrested on the pretext of investigation as disputes arose among Christians and Hindus in the village. They were let off two days later on bail but the social pressure against Christians in the Shaler Village stays intense.

Satana Taluk, Nashik: More than 10 years ago the first missionaries from FMPB (Friends Missionary Prayer Band) arrived in the Shaler village with the good news of Jesus Christ. About 20 families accepted their message and embraced "Jesus Christ as Lord and Savior without any force or inducement."

Life did not change for the Christians in the village, they still went about their daily chores as they did in the past and the relations with the villagers and elders remained friendly. But in the year 2002 volunteers from the RSS and the fundamentalist’s organizations began visiting the villagers. It was then that trouble started for the missionaries and the Christian families in Shaler village.

Starting from April 2003 there have been around 10 incidents of attacks and threats on the small Christian community in the village. Some of the incidents are given below:

7th July 2003: The sarpanch and a group of people attacked Missionaries and local evangelists again. They made them leave the village by force. The Christians registered their complain with the local police station (Jaikhedan) but no action has been taken till date.

19th December 2003: A Christian prayer meeting was disrupted by an unidentified mob. The Christians were forced to worship idols that the mob brought with them. They also forced to Christians to wear malas (Hindu religious necklaces) and gave them pictures of Hindu gods in order to facilitate their worship.

5th January 2004: The RSS and its volunteers spread rumors about Christians breaking and desecrating a Hindu temple about a kilometer away from the village. They employed a local newspaper for the purpose too and hence carried out a systematic disinformation campaign against the Christians. The news was eventually found to be misleading but Christians have had to pay a price.

6th January 2004: The local police inspector from Jaikhedan threatened Christians with dire consequences if they did not give up their faith in Christ. He was accompanied by a rowdy mob and they manhandled some of the Christians. The Christians were accused of breaking the temple and were threatened of arrest by the local police.

7th January 2004: Four Christians were arrested and kept in police custody for about a week. They were released on bail later.

The latest incident too is in the line of the events outlined above.

Appa Sonu Borde, has a land of about 5 acres which he has been cultivating for the past 25 years. He has the proper papers of the land and even pays his taxes. But now the revenue inspector has told him that he can no longer have his land. What is more atrocious is that the revenue inspector, has sold off his land by auction, to someone else. Borde has been told that if he tries to get his land back or makes an appeal he will be killed. All this has happened to Borde just because he accepted Christianity a few years back. He says that people were after his property and his being a Christian gave them a good excuse to take it away by force.

It was in this context that the police called Motiram Borde and his son, Bhagwan to the police station for investigation and arrested them when they got there. False charges have been framed against them and they have been dragged in a long legal battle unnecessarily. The villagers and the police are threatening Christian families in the village day and night. They Christians are being forced to renounce Christianity and reconvert to Hinduism otherwise their would be burned down and they will be forced to leave the village.

This has created a lot of tension in the village with the lines now clearly drawn between Hindus and Christians. The systematic disinformation campaign of the RSS and its allies has paid off in Shaler village. The Christians, meanwhile have appealed to the worldwide community to help them to safeguard their rights.

Posted by Christian Persecution India at 11:25 AM 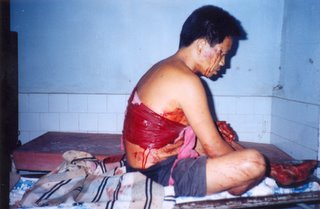 Intruders use knives, spears to attack a local missionary and his family.
By Vijayesh Lal

DELHI, July 2 -- An Indian pastor brutally beaten in an attack in West Tripura in late April is still recovering from serious knife wounds.

Letthang Gangte, a missionary sent out by the Evangelical Congregational Church of India, received cuts to the head and back, and a deep stab wound in the stomach. His wife and two young children were also severely injured.

However, police have insisted that until the family can identify and name the perpetrators, no action will be taken.

Gangte and his wife were awakened around 3 a.m. on April 19 by a group of men armed with knives and spears who had broken into their small mud hut in the village of Rajghat, West Tripura.

His wife screamed and Gangte attempted to fight back. Meanwhile, a heavy storm drowned out the sounds of the struggle. By the time Gangte managed to escape and alert the neighbors, all four members of his family were seriously injured.

In the thick darkness of the storm it was impossible to see the faces of the intruders. The pastor and his wife say there were at least eight, and possibly ten, men in the group.

The neighbors immediately called the police, but when they arrived, the intruders had left, taking with them some of the families' belongings.
The pastor and his family were then taken to Agartala Hospital for treatment. Gangte was covered in blood after receiving a number of severe head injuries, two deep cuts across his shoulder and a deep stab wound to his abdomen. He also suffered a broken bone.

Witnesses say it was a miracle that Gangte survived.

His wife sustained injuries to her head and one arm. Their daughter Bebem, 7, and son Bawilun, 10, were treated for slashes on their calves and thighs.

The family comes from a village in Manipur, northeast India. The Evangelical Synod Church, a constituent member of the Evangelical Congregational Church of India, sent them to Rajghat village as missionaries in 1995.

Even before they arrived, signs of trouble surfaced. Another local missionary was attacked on the night of December 5, 2002. He was slashed six times with a knife on his head and other parts of his body. The incident so disturbed him that he was recalled from the village.

Local Christians believe both attacks were carried out by the same assailants.

Gangte wants to return to the village, despite the intimidation. "I will not leave, even if it means the end of life for myself and my family," he told us through his leaders.

However, his family is still traumatized after the attack. They are living in safety outside the village, but both children continue to have nightmares and are afraid to sleep in the dark.

In an effort to safeguard the family on their return, the sending church has drawn up plans for the construction of a brick house which could provide more protection than the mud hut the family occupied. The hut's walls had softened during the rain storm, allowing the attackers to break in easily.

One local Christian told us that the Vishwa Hindu Parishad (VHP) and the Rashtriya Swayamsevak Sangh (RSS), two organizations known for their extreme Hindu beliefs, are very active in the region. The RSS insists the tribal people should not convert to what they call Christian "slavery." Both organizations have launched a propaganda campaign to convince tribal people who have converted to Christianity from animist religions that they were actually Hindus.

If tribal people do become Hindus, they are automatically placed on the lowest level of India’s caste system as "Dalits" ("Untouchables"). Only the most menial jobs are allotted to Dalits; higher-paid employment is reserved for people of higher castes.

The Christian church, on the other hand, is committed to raising the standard of education and employment for tribal people.

Theoretically, a non-Hindu tribal person is not subject to the caste system. Therefore when tribal people reject animism and turn to Christ, their conversion threatens the very fabric of Hindu society.

Gangte and his family are still recovering from their ordeal. Their sending church requested the police to carry out an investigation in Rajghat, but the officers refused, saying Gangte must first positively identify the men who attacked him. Gangte is reluctant to do so, fearing reprisals against himself and his family.
The church is currently seeking legal advice.
Posted by Christian Persecution India at 11:30 AM