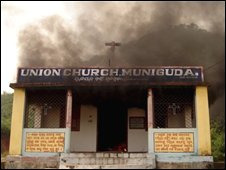 Orissa has seen rising tension between Christians and Hindus

Four people have been arrested in the eastern Indian state of Orissa in connection with the rape of a Catholic nun more than a month ago, police say.

At least one police officer has been suspended, officials say.

The 29-year-old nun lodged a complaint on 25 August alleging rape by a member of a Hindu mob in Kandhamal district.

Police are criticised for being slow to act - they say they have been trying to keep the peace in the area, which has seen weeks of Hindu-Christian violence.

Riots began after a Hindu religious leader was shot dead.

Although left-wing Maoist rebels in the state claimed responsibility for the killing, hard-line Hindu groups blamed the minority Christian community for the death.

More than 30 people have been killed in the violence and dozens of churches and Christian institutions have been vandalised.

Kandhamal police chief Praveen Kumar confirmed the rape and told the BBC that four people had been arrested.

He said the absence of the nun from the area had hampered the investigations.

"But we are taking action and the culprits will be punished," he said.

The Catholic nun, working with the Divyajyoti Pastoral Centre at Kanjemandi village, alleged that she was dragged out of a Hindu man's house where she had taken shelter along with a 55-year-old priest, Father Thomas Chellantharayil.

She was taken to an abandoned house where she was raped by a member of the mob, she said in her complaint filed on 25 August. 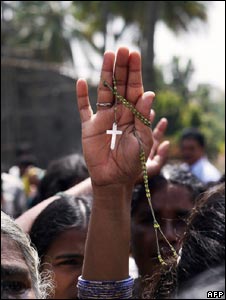 Christians have also faced attacks in Karnataka and other states

She also alleged that she was paraded naked through the streets.

Sangeeta Mishra, the doctor who conducted the medical test on the nun the same evening, also confirmed the rape.

"We immediately informed the police, but they never came to collect the report," Dr Mishra said.

The BBC's Sandeep Sahu in the Orissan capital Bhubaneswar says the police finally began investigating the case on Thursday - a full 38 days after the incident - following reports of the rape in the media.

Police in the Kandhamal area have said they were unable to take action earlier as they were busy trying to deal with the violence.

Officials in Bhubaneswar said Mr Rao had now been suspended.

Clashes between Hindus and Christians began in Orissa in August when a Hindu religious leader was shot dead.

Attacks on Christians have also been reported in the southern states of Karnataka, Tamil Nadu, Kerala and in the central state of Madhya Pradesh.